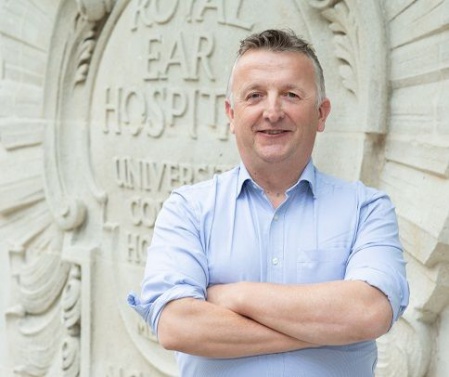 Peter Andrews, consultant ENT and head and neck surgeon, was appointed to the Royal National Throat Nose and Ear Hospital (now the Royal National ENT & Eastman Dental Hospitals) in 2005. He has a sub-speciality interest in rhinology and facial plastic reconstructive surgery. He undertook his undergraduate medical degree at University College Hospital and Middlesex School of Medicine including an intercalated BSc in anatomy and nerve regeneration.

His higher surgical training was completed in the North Thames Deanery. He was awarded the Joseph fellowship from the European Academy of Facial Plastic Surgery in 2005.

His main clinical areas of interest include nasal airway reconstruction and facial reanimation surgery. He has co-designed and implemented a tertiary referral facial function clinic at the RNENT & Eastman Dental Hospitals (RNENTEDH).

He has an expanding interest in sinonasal neoplasia and other aspects of anterior skull base surgery. He is an honorary consultant surgeon at the National Hospital for Neurology and Neurosurgery (NHNN) and is an active member of its monthly skull base MDT. He runs a weekly ENT clinic at Whittington Health and is the clinical lead for the walk-in urgent referral clinic at the RNENTEDH. He is secretary for the RNTNEH consultant forum and the surgical lead in the successful LEAN process for surgical activity.

For the last five years he has been a tutor and course director at the EAR Institute, involved in design and delivery of several national and international courses. He is an educational supervisor for core surgical ENT trainees at the RNENTEDH and has successfully attained a funded advanced rhinology fellow.

He is council member and membership officer for the rhinology/head and neck section of the Royal Society of Medicine (RSM).