Prostate cancer is the most common cancer in men in the UK, with over 40,000 new cases diagnosed every year. This is Chris' story. 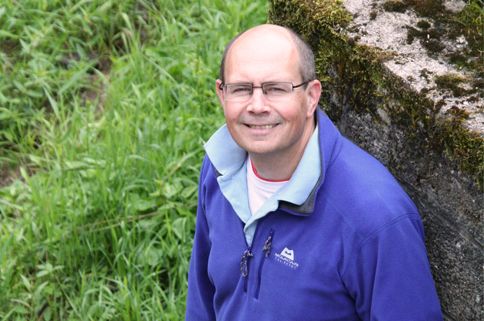 "Talking to the team for the first time gave me real confidence, masses more knowledge and I felt that I was becoming part of a group rather than ‘The Patient’"

Chris was initially diagnosed with prostate cancer in 2011 although he did not have any notable symptoms at this time. His diagnosis was made after a random blood test that had been offered to him through an email invitation to all of the men at his place of work. It later turned out that this had been a very important decision. The blood test revealed that his PSA (prostate-specific antigen) level was raised at a score of 12 – which can be an indication that prostate cancer might be present. This was the moment that Chris’s experience with prostate cancer truly began.

Chris attended his local hospital for a TRUS biopsy – a commonly use procedure that helps establish if cancer is present. Soon after he was called in to discuss the options for a diagnosis of 3+3 gleason level prostate cancer. “At that point I felt I really had to learn about the disease in depth so I could take control of my situation. I had the feeling that knowledge would provide me with power in fighting the whole thing”.

Chris was given a number of options of how next to proceed. "All of my options had pros and cons and I found myself evaluating what the different clinicians had to told me". Ultimately he would have to make his own decision about which way to go. “My advice at this early stage is to talk to everyone and to be referred everywhere - leave no stone unturned before you decide which way to go”.

It was at this stage that Chris first came across UCLH and the work of Professor Mark Emberton and his team, and discovered the existence of clinical trials. Fortunately their work was at a stage where they were looking to recruit men with Chris’s level of disease, so it became a real option for him. “Talking to the team for the first time gave me real confidence, masses more knowledge and I felt that I was becoming part of a group rather than ‘The Patient’. Of course I am a patient, but the pathway involvement at UCLH feels very different. There is no ‘them and me’, but more a group with a common aim, seemingly limitless advice and information provided with a personalised approach”.

The treatment that Chris decided upon was high intensity focused ultrasound (HIFU) therapy. This is a targeted therapy for prostate cancer which uses high frequency ultrasound waves to destroy cancer cells in the prostate. It aims to provide treatment with fewer side effects than some others, and is one of the only treatment pathways involving partial effect on the prostate which is targeted directly at the affected area (much like many other cancers can now be targeted).

HIFU is a trial treatment and the nature of clinical trials was carefully explained to Chris. “The nice thing for me was feeling a part of how medical science makes progress, and how many could benefit in the future. Long discussions about the whole process were frequently had and I have definitely learned a huge amount”.

Chris’s treatment pathway involved a variety of scanning followed by the initial procedure. This was complemented by regular template biopsies. None of Chris’s treatment has involved anything longer than an overnight stay in hospital.

“Throughout the whole process my confidence in fighting the disease has been strongly backed up by the team and everyone at UCLH, and I've always been very grateful for that. I think the psychological side of diagnoses and treatments can often be given insufficient appreciation and time within the pathway. There is plenty of support outside of that via the various excellent charities and groups available”.

"I will see how it goes from here, with the key thing being the consistency and dedication of the UCLH team into the future”.

The clinical trial took place over three years so Chris has been in London every three months for progress discussion, scans and tests. “I live in the Midlands near Worcester, but every penny of train fare has been worth it! I've always known the treatment isn't widely available, and the feeling is always there that I am being looked after by a dedicated and very skilled team and a part of valuable research”.

Chris is not yet quite out of the woods and has had some follow up cryotherapy as part of the pathway. His PSA level is now massively reduced. “I will see how it goes from here, with the key thing being the consistency and dedication of the UCLH team into the future”.

Outside of the treatment Chris has been inspired to try to raise money for UCLH and PCUK through cycling events. He has always been a keen cyclist and the treatment hasn't affected that at all. He has also used his experience with clinical trials to help PCUK on their Grant Advisory Panel (“another story!")

“My experience has made me appreciate even more the work, dedication and technical progress being achieved by the NHS, often in difficult financial circumstances. No one should be in any doubt it's by far the best in the world. Had I been ill in many other countries things would have been very different, so I'm grateful for that bigger picture too”.

In November 2015, the prostate cancer team at UCLH won the ‘Acute Sector Innovation’ Health Service Journal (HSJ) award for innovation in diagnosing and treating prostate cancer. Chris joined the team at the awards ceremony to collect the award. “The award is a huge accolade for UCLH and the team and is richly deserved. I'm really proud and lucky to be receiving the most innovative treatment in the UK!”