In late 2008 Judy began experiencing debilitating pain in her jaw and persistent insomnia (inability to sleep). 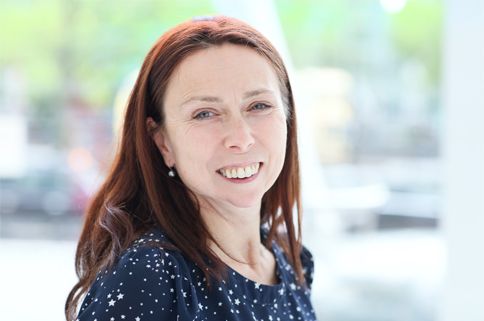 At first there were no visible lumps or obvious signs to the cause of her pain. Over the course of 12 months she had lots of viral infections and even shingles at one point. She was very run down, but thought that this was due to working hard at the time and having a young child at home. After many trips to the dentist, and one root canal after another, it became clear that something more serious must be wrong.

Judy was eventually referred to her local Maxillofacial Unit at Northwick Park Hospital. She was diagnosed with spindle cell sarcoma of the lower jaw - an extremely rare and aggressive cancer.

“The diagnosis, was earth shattering. My partner and I were devastated by the news. At the time our son was just a toddler”.

After coming to terms with the diagnosisJudy became determined to beat the disease and was prepared to do whatever was necessary to win her fight.

Judy was referred to UCLH. “My family and I met the oncology team (doctors specialising in cancer) and the mind numbing fears I had just disappeared”. Judy’s treatment plan was discussed by the multidisciplinary team (MDT) who recommended an aggressive course of chemotherapy (as an inpatient) followed by extensive surgery to her jaw. Surgery would involve removing the lower jaw and reconstructing it with the fibular bone from her lower leg. Judy remembers, “As frightening as the initial diagnosis was, I was relieved to know the reason for the horrific pain and insomnia that I had been experiencing and that it was treatable”.

Within one month of her diagnosis Judy began her oncology treatment. She tells us, “To be honest, I wasn’t worried or frightened about commencing chemotherapy. I had absolute faith in my team right from the very start. It was an exhausting business in the beginning; all of the initial scans, travelling to and from appointments, time spent in waiting rooms. I was looking forward to getting started with chemotherapy and getting well again”.

So it began, five months of chemotherapy. Judy recalls, “In all that time, I couldn't find fault with the wonderful staff that looked after me at the hospital or at home over the phone, day and night. I was always made to feel like I could have been the only patient on the ward. They were so caring that I felt like I was wrapped in cotton wool, and guided me gently, every step of the way. I took full advantage of the wonderful 'healing hands' of the complementary therapists too”.

"All of my treatment with UCLH has been at a centre for true excellence. My cancer has gone and I'm still here. So many positive things have come out of the whole experience."

Judy was fortunate that she never suffered from nausea or sickness during the treatment and actually put on weight, “I commented upon this fact rather proudly to one of the senior nurses who told me, ‘I don’t think that’s due to you, that’s because of us, love!’”.

The second phase of Judy’s treatment was surgery. Surgery would mean visible scarring on Judy’s neck and lower leg, “The surgery date loomed and I was of course terrified. However, the positive experience I’d had on the oncology ward helped me stay positive and focussed for the surgery”.

Judy’s surgeon was consultant oral and maxillofacial surgeon Mr Nicholas Kalavrezos, “Mine was to be a very long and complex surgery, as was the post-operative care. I would have to learn to talk, walk and eat again. I felt privileged to have had such an eminent surgeon leading such a brilliant team”.

Judy underwent resection and reconstruction of her lower jaw. The surgery was successful. The recovery was going to be a long progress, but she was in capable hands, “The clinical nurse specialist (CNS) team were superb, especially after the major surgeries. Nothing is too much or insignificant. I cannot imagine how different my recovery would have been, were it not for the support of my brilliant team”.

Emotionally, Judy was exhausted after eight months of intense treatment and was feeling very down about her scars, “Overtime, and with the help of the charity 'Changing Faces', I began to see my scars in a different light. It was like an epiphany - my scars are the reason I am still alive, and that is something to be immensely proud and grateful for”.

Judy went back to work full-time and normality resumed. Six years later and she is still free of disease, “All of my treatment with UCLH has been at a centre for true excellence. My cancer has gone and I'm still here. So many positive things have come out of the whole experience. Two years ago, I decided to take up running, much to the amusement of everyone that knows me. I've never really been a sporty type, but last year I took part in my first half marathon, and completed it in a reasonable time”.

A few weeks later Judy decided to really go for it and signed up for the Brighton Marathon: “The training was really tough, but I knew I could do it. I kept reminding myself about how far I'd come since the cancer diagnosis. When the marathon day eventually came, I felt like a winner before I'd even started! Every mile I ran that day, I ran with the biggest grin”.

Judy’s care continues under the team at UCLH as part of a long term follow up plan to ensure cancer has not returned.

“My family and I are forever indebted to the most wonderful and brilliant teams at UCLH”.

“Thank you with all my heart”.