Back to Living with MS

When Aris Giourgas set up a Facebook group to offer tips and advice for people with multiple sclerosis (MS), little did he know that it would eventually lead to romance. 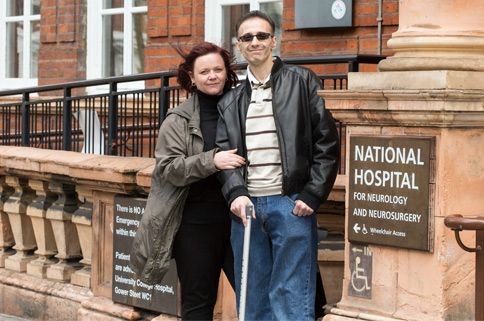 The Facebook group now has nearly 20,000 followers from all over the world, and one of those members is Jackie Mullane, who was first diagnosed with MS in 2007. Jackie and Aris initially struck up a friendship through the group because they are both patients at the National Hospital for Neurology and Neurosurgery (NHNN), but romance soon blossomed and they are now engaged.

Aris said: “We have a lot to thank the NHNN for, not least for bringing us together. I absolutely love the hospital and the staff. Everyone is very professional and as a result of the treatment I’ve been receiving I’ve only had two heavy relapses in almost 20 years.”

Aris was first diagnosed with MS in 1996 and has been a patient at the NHNN ever since. He was one of the first patients in the UK to trial Interferon Beta-1B, a medicine which is used in relapsing remitting MS for people who have had a demyelinating event and are at risk of developing secondary progressive MS.

Jackie has been a patient at the NHNN since 2007.

She first noticed that something was wrong shortly after starting a new job as a meal time supervisor at her daughter’s school. She started walking with a limp and then fell three times in just a few months. Jackie’s GP recommended that she have an MRI scan. The scan lasted for an hour, a scary experience for someone who had never undergone such a test before. After further tests, including a lumber puncture, she was diagnosed with MS. She said: “I did cry for about five minutes, but my attitude was ‘Ok, I have MS, so what? There are worse diseases out there’.”

"The MS nurses are fantastic, and if you need advice on any symptoms they are on the end of the phone.”

Aris and Jackie both firmly believe laughter is the best medicine when it comes to dealing with MS. Aris said: “We understand what each other is going through and by having a laugh together we have formed a really strong bond.”

Ajit has been a patient at the National Hospital for Neurology and Neurosurgery (NHNN) since being diagnosed with multiple sclerosis (MS) in 2002. 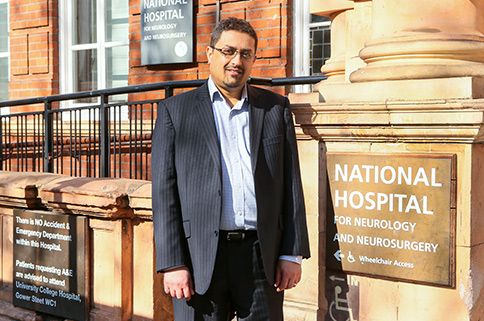 “I’m a long-standing NHNN patient and so have lots of experience of being a patient here. The clinical team are fantastic. At the moment, I come to the NHNN twice a year and find everyone very approachable. I feel comfortable asking the team anything – no question is considered too trivial, too unimportant, they’re all very human. There’s also NeuroDirect which is really helpful for things you might want some advice on in between appointments.

“I came to hospital recently for a day-long assessment as I am going to try out a different medication as I’m getting side-effects on the medication I’m currently taking. I was really impressed, everything went very smoothly – all the tests I needed were done in a day - even the lunch was great!

“Diagnosis and treatment for MS inevitably involves lots of scans – I’m used to them, but I know they can be really intimidating for people who are undergoing a scan for the first time. The team who do the scans are fantastic – they go out of their way to put you at ease by explaining what’s going to happen and they take time to talk you through the whole process. They even put music on (if that’s what you want) to distract you which can really help.

“I am very glad to be under the care of the expert team at the NHNN - I feel I’m in the best place for my MS treatment which is very reassuring.”

“I’ve also had a lot to do with the physiotherapy team over the years – discipline in this area is not my strong point, but they encourage you to stay motivated by helping you understand why and how the exercises can help you and your general well being. They do their very best to help you help yourself.

"I am very glad to be under the care of the expert team at the NHNN - I feel I’m in the best place for my MS treatment which is very reassuring.”