Back to Insomnia and behavioural sleep medicine clinic

Zehavah Handler struggled to sleep for 25 years before completing a five-week course at UCLH’s insomnia clinic. Here, she tells us how it changed her life.

Zehavah was just 13 when sleeping started to become a nightmare.
She drew a tiny dot on her bedroom wall and stared at it for hours each night, in the hope of nodding off. 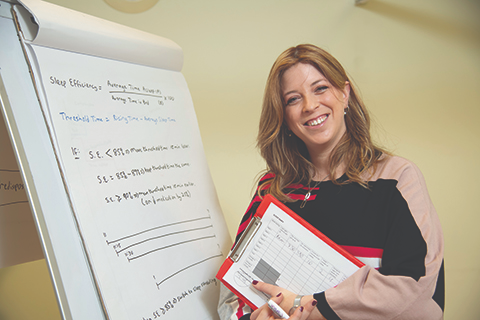 Over the years, Zehavah, who is now 40, tried everything from putting lavender oil on her pillow to over-the-counter pills and hypnotherapy – but sleeping still wasn’t easy.
Her GP had little sympathy and her nights and days, revolved around thoughts of sleep.
Zehavah, who has four children, said: “I could never physically or mentally see past when I was going to be able to sleep next.

“I’d get up at seven in the morning and tell myself to make it until midday. Then I’d be so grateful to get into bed until about three in the afternoon. I’d get up when the kids came home and, by 7pm, I was getting into bed.”
Sleeping for an average of just two and a half hours of the 12 she was in bed each night, memory loss and irritability became a problem.

Zehavah said: “It was like walking around in a thick fog and there was a tiny light and you are trying to get to it but the fog is distorting it and you can’t get there – that’s what my mind was like.
“I was always on tenterhooks, always just trying to get through, rather than living.”
Eventually, she was referred to the insomnia service at the Royal London Hospital for Integrated Medicine, part of UCLH.

There she met the clinic’s founder, Hugh Selsick (pictured right), a psychiatrist and former insomniac.
All of a sudden, I wasn’t on my own – I feel like I’ve got my brain back.

Zehavah said: “Seeing him was life-changing. All of a sudden, I wasn’t on my own.”
After a night in a sleep unit showed Zehavah’s sleep wasn’t being disturbed by a medical condition like restless legs syndrome or sleep apnoea, she was enrolled on a five-week group therapy programme.

This used a series of exercises designed to make the brain associate the bedroom with sleep and only sleep.
Laptops, TV and meals in bed were banned and Zehavah was urged to get up and leave the bedroom if she was lying awake for more than 15 minutes.

She said: “That’s really hard to do if it’s 3am and the whole house is sleeping and the heating is off but it works.”
Now, two years later, afternoon naps are a thing of the past. Instead, Zehavah turns in around midnight and regularly clocks up six hours’ sleep a night.

There is still the odd sleepless night but, overall, the fog has lifted and her days are much more productive.
In fact, her life has changed so much that she is retraining as a sleep counsellor.