Penile cancer is uncommon, affecting between 400-500 men in the UK each year. Martin is being treated at UCLH. Here is his story. 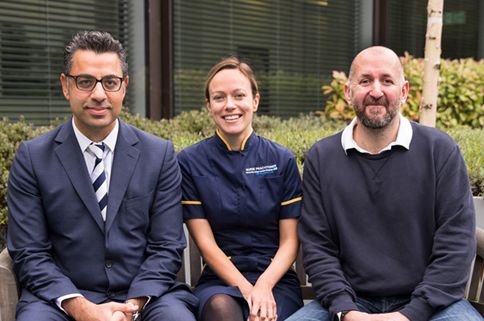 "It all happened so quickly, my world was completely turned upside down. I was terrified, mortified, so scared for what the future might hold."

Faced with a poor prognosis at his initial diagnosis of advanced penile cancer Martin reflects, “I should be a dead man walking, but I’m here thanks to the amazing team at UCLH. I trusted my consultant Mr Asif Muneer with my life, he saved my life”.

Martin’s story started in 2010 when he attended his local clinic with a rash on his penis. Prescribed some cream for what was diagnosed a skin condition, Martin thought it was nothing to worry about. Fast forward three months and Martin found himself sitting in a consulting room at UCLH with consultant urological surgeon Mr Asif Muneer, who gave him the devastating news that he had a highly aggressive form of penile cancer that would need to be operated on within days. “It all happened so quickly, my world was completely turned upside down. I was terrified, mortified, so scared for what the future might hold. The side effects of surgery really worried me – would I still be a man and function as one? I had thoughts that I’d actually be better off not being here”.

Following a glansectomy (a procedure that involves the removal of the tissue at the end of the penis) and a skin graft taken from his thigh to reconstruct his penis, Martin met clinical nurse specialist Clare Akers. “She is totally amazing. On her badge it says ‘Nurse Practitioner’, but she is so much more to me. She is my link to the hospital and has always got my back in fighting this cancer”. To try to ease some of his concerns, Clare arranged for Martin to speak to a patient who had been through the same procedure over the telephone. Martin says “It was the most awkward five minute conversation of my life, but it really helped me”.

For Martin, that was just the start of a journey that has seen six operations to remove subsequent secondary tumours in his groin and pelvis, radiotherapy and countless appointments. “The radiotherapy was a low point - I had it every day for six weeks and it nearly sent me over the edge, both physically and mentally. I stayed at the Cotton Rooms (the UCLH patient hotel) which was just fantastic – it was my sanctuary and gave me the space I needed. I just wanted to be on my own and get through it”.

As well as treatment for cancer, Martin has been admitted to UCLH twice with streptococcus (“Strep A”) infections, which can occur as a result of a weakened immune system, a side effect of radiotherapy and having the lymph nodes removed. Again, the team has been right by his side. “I phoned Fiona Holden (a clinical nurse specialist) to ask about a rash that was spreading minute by minute. She asked me to send her a photo. She received it and told me to come to the ward she was on immediately. On arrival I collapsed and woke up sometime later to find Fiona and the team getting to work on me. Make no mistake - Fiona Holden saved my life that day”.

"I wanted to share my story so that anyone going through this at UCLH can feel assured that they are being cared for by the most amazing, expert, kind team you could ever wish for."

Life has changed for Martin – he now suffers from lymphoedema as a result of the cancer and has been unable to return to work. He continues to be scanned every four months to check for tumours. If he remains tumour free during the next nine months, his chances of living a longer life improve dramatically.

Martin is now on a mission to help spread the word about male cancer. He is part of a penile cancer support group (open to UCLH patients) that meets every month to support fellow patients and help shape future services. The support group has been set up and is run by clinical nurse specialist Clare, and is the first of its kind in the world. Martin is also a proud representative and ambassador for male cancer charity Orchid, who are at the forefront of research into male cancers.

“I know this is not an easy read, but I wanted to share my story so that anyone going through this at UCLH can feel assured that they are being cared for by the most amazing, expert, kind team you could ever wish for. They have given me back a quality of life that I thought I had lost - without this team I wouldn't have realised my childhood ambition of paragliding, which I do regularly now".

Martin wanted to share this story in memory of his good friend Dave Berwick who sadly recently lost his fight with penile cancer.