Laryngeal cancer is a type of cancer that affects the larynx (voice box).

The larynx is part of the throat found at the entrance of the windpipe (trachea). It plays an important role in helping you breathe and speak. Gloria was referred to UCLH and a subsequent biopsy found a large cancerous tumour on her larynx. This is her story. 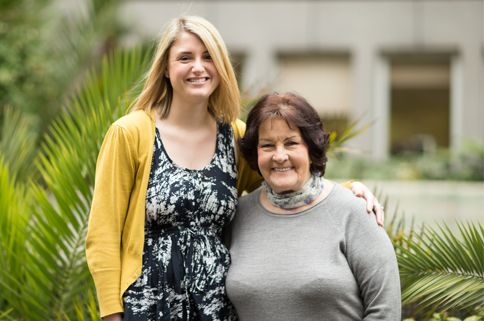 "I wasn’t totally sure about proceeding with surgery, but I discussed the procedure with my wonderful team of consultants, nurses and speech and language therapists and I agreed to surgery."

Gloria moved to London in the summer of 2007 to start work with a lighting company. She was excited to begin a life in the capital city and planned to spend holidays visiting various destinations across the UK.

However, this life was not meant to be. Just a few months following her arrival in London Gloria starting experiencing a sore throat that would not go away, she recalls: “Shortly after getting a sore throat, my voice also became very hoarse. I thought that this was just due to me being a heavy smoker, but soon I was not able to swallow either and I was losing weight very quickly”.

Following a throat examination from her GP, Gloria was advised to attend the Emergency Department at UCLH where she was immediately admitted to the Acute Medical Unit (AMU). She was assessed by Consultant ENT Head and Neck Surgeon Mr Francis Vaz and transferred to the Head and Neck Ward, in the Oncology Department.

A biopsy was performed the following week that showed a large cancerous tumour on Gloria’s larynx (voice box). Gloria’s case was discussed at the Multi-Disciplinary Team (MDT) meeting and Mr Vaz explained her treatment options: “I did not want to go through radiotherapy treatment, but fortunately my consultant Mr Vaz advised me that a surgical operation was an option”.

"Having cancer of the throat was a daunting and life changing experience for me. However, with the help of the wonderful UCLH staff as well as support from my family, particularly one of my sons who lives here - I am able to carry on living a normal life."

“I wasn’t totally sure about proceeding with surgery, but I discussed the procedure with my wonderful team of consultants, nurses and speech and language therapists and I agreed to surgery”. Gloria was administered with a course of chemotherapy prior to surgery in order to try and shrink the tumour. Mr Vaz was then able to perform a total laryngectomy – a total removal of the larynx.

Gloria’s surgery was a success, but it has significantly affected her life, “The removal of my voice box has affected my speech, swallowing and breathing”. Having a laryngectomy means that there is no longer a connection between the lungs and mouth. During the surgery another means of breathing was made by creating a permanent hole in Gloria’s neck (called a stoma). This would enable her to learn to swallow, and with time enable her to get her voice back.

Getting her speech back has been a difficult journey for Gloria. During the surgery a small hole called a tracheo oesophageal puncture (TEP) was created in both the trachea and oesophagus. This allowed the team to insert a prosthetic voice valve to once healing was complete, Gloria recalls: “Ten days after surgery, I was eating and drinking due to not having any problem with swallowing. However, not being able to find my voice, I was given a botox injection in the area of my neck where the speech muscle is situated – this was due to stiffness in the muscle”. After a few days, Gloria was happily chatting away. With the help of specialist speech and language therapist Laura-Jayne Watson and the clinical nurse specialist team, Gloria has learned how to speak again and has been taught how to care for my stoma and voice valve.

Gloria is now free of cancer and is getting on with her life.