Back to Oesophageal and gastric cancer patient experiences 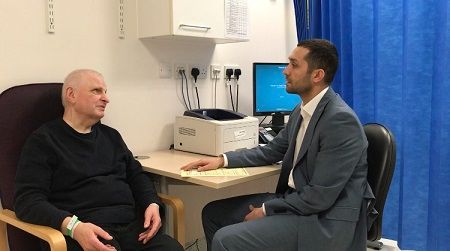 Mike Ryan, aged 67 from Finchley, was diagnosed with oesophageal cancer in August 2017 after noticing pressure in the back of his throat and regurgitation of thick saliva when he ate. He initially put his symptoms down to indigestion, but a particularly uncomfortable experience while eating in a restaurant with his wife and friends prompted him to see a doctor.

An endoscopy and biopsy at Chase Farm Hospital concluded that Mr Ryan had cancer in his oesophagus – the tube that connects the throat to the stomach. He was referred to University College Hospital, which is a specialist centre for the treatment of oesophago-gastric cancer. He was initially given chemotherapy to try and shrink the tumour prior to having surgery to remove it.

The operation was complex and involved opening his chest and abdominal cavity for the removal of the tumour, in addition to repairing his abdominal wall due a large hernia from previous surgery. Mike agreed to have his operation filmed so that clinical staff and patients could learn from his experience. Following surgery, He has received oral chemotherapy and some radiotherapy to continue his treatment.

Mike has been blind since being born prematurely in the 1950s. He says that this didn’t impact his treatment for cancer but meant that the clinical team tried to explain his treatment in a bit more detail to help with his care.

There have been ups and downs for Mike – he had some adverse reactions to his initial chemotherapy, which was further complicated by a bleeding ulcer and a skin infection. However, after finishing his full treatment in May he is now doing well and, although still tired, is enjoying being able to eat as normal. Impressively, just three weeks after concluding his final chemotherapy and radiotherapy he felt well enough to share his experiences at the Oesophago-Gastric Cancer Awareness Day held at UCLH on 29 May.

Mr Ryan commented: “I’d like to thank all the NHS staff involved in my treatment across the region, from Chase Farm to UCH and more. It has been a real team effort and the surgical team at UCH were excellent and explained everything so clearly to me. I really felt in safe hands.”

He said: “We were so privileged that Mike was able to share his experience of oesophageal cancer with other patients, carers and healthcare staff at our awareness day. He gave a unique and genuine insight into his treatment and spoke candidly about some of the ups and downs involved in cancer treatment. I know that his experience will help other patients and NHS staff moving forward.” 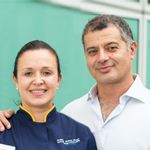