Back to Neonatal care

When Sam Ahern was born 24 years ago, she was the smallest baby our neonatal unit had ever looked after. Now an accomplished musician, she has gone back to meet the team that helped her win her fight for life.

Delivered 16 weeks early, Sam was barely bigger than her grandfather’s hand. She weighed just 480g (a touch over 1lb) – less than half a bag of sugar and an eighth of the weight of the average healthy baby.

Her lungs were so underdeveloped that she spent the first 15 months of her life in hospital.

Even when her parents were allowed to take her home, they had to take an oxygen cylinder with them whenever she went out in her pram.

Two decades later, Sam returned to our neonatal unit, where many of the team that looked after her still work.

This includes Judith Meek. Now a consultant paediatrician, she was a junior doctor in 1996.

Judith said: “I was present at Sam’s birth and helped care for her in the months afterwards.

“We just weren’t used to such exceptionally tiny babies 21 years ago. Even today, we only treat a handful of such very, very small babies a year.

“The next time I saw her, she was five years old, taking part in a fun run and beating a lot of the other children.

“For me, it was a real light bulb moment – the fact that you could be in hospital for over a year, go home on oxygen and yet run so beautifully.”

Despite that early success, Sam’s health was far from perfect as a child and she underwent a range of treatments, including speech therapy and physiotherapy.

She also has autism, which is more common in very premature babies than in the general population.

Now a happy and confident 24-year-old, the fighting spirit she showed as a baby still shines through today. A talented guitarist and clarinettist, Sam has given talks to MPs, had two plays performed at a central London theatre and is making a documentary about our neonatal unit for her degree project.

Sam, who lives in north London, said: “My family still marvel at the fact that I was that small and still survived. “And other people often say to me, how do you do so much? “I tell them that I realised early on that many things are easier for others and so I have to stay two steps ahead to stop them from catching up with me.” 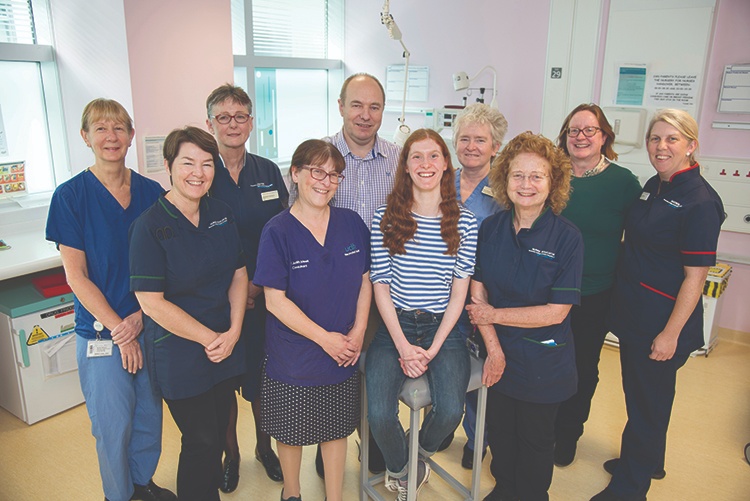 A reunion with some of the staff from 21 years ago - picture was taken before the pandemic.