Back to Auditory implants 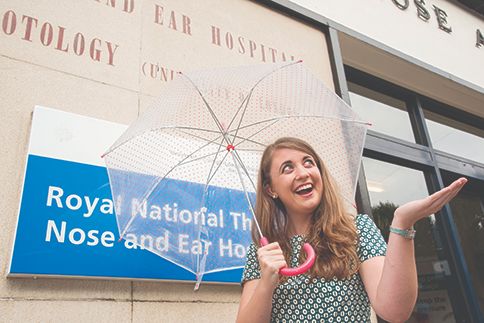 To most of us, the tap, tap, tap of raindrops is a rather unwelcome sound. But to Jeanann Doyle, it is magical.

Jeanann heard raindrops land on her umbrella for the first time in 25 years after a cochlear implant allowed her to hear clearly again.

Jeanann, 30, is also revelling in hearing other everyday sounds, from birds chirping in the morning to something as simple as water trickling out of the sponge as she washes her dishes.

She said: “I feel free to be myself and it’s wonderful.”

"My surgeon, Mr Khalil changed my life. I have no shame in saying he is like a hero to me."

Jeanann’s parents first noticed that something was wrong with her hearing when she was just three years old and, from the age of five, she had hearing aids in both ears.
These proved to be a lifeline until the end of last year, when a sudden deterioration in her hearing left her severely to profoundly deaf.

With everything from a conversation in a pub, to a chat at a supermarket checkout nigh on impossible, Jeanann stopped socialising and her confidence plummeted.
She said: “It was almost as if the ground was slipping away from under me.”

A series of tests at the Royal National Throat, Nose and Ear Hospital (RNTNEH), which is part of UCLH, showed her to be a candidate for a cochlear implant.

These tiny electronic devices bypass the ear’s normal hearing 'machinery' and are sometimes recommended when even powerful hearing aids fail to help.

Voices initially sounded more like Minnie Mouse than the real thing – but Jeanann could hear them.

As her brain got used to the implant, the taps, bangs, whistles and pings of everyday life soon became a source of wonder.

Jeanann, a nutritionist, said: “Two or three days after my implant was switched on, I was walking home in the rain and put my umbrella up to stop my cochlear implant from getting wet.

“The next thing, there was a tapping noise, and it took me about 10 minutes to figure out what on earth it was.

“I texted my mum because I was so excited and I told her it was my favourite sound.”

Her hearing has continued to improve and trips to the pub are now a source of pleasure, rather than pain.

Jeanann, who recently described her experience to MPs at a House of Commons reception, said: “It is like I have been born again with new ears.”