Prostate cancer is the most common cancer in men in the UK, with over 40,000 new cases diagnosed every year. This is Nick's story. 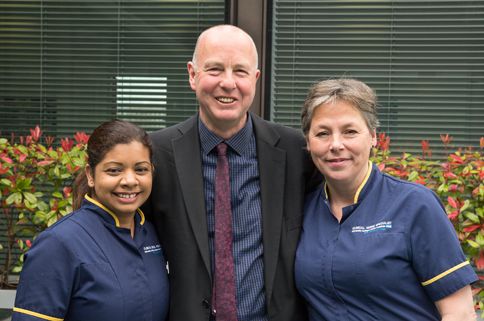 "The team were both articulate and considered in presenting detailed information. They offered me access to new forms of treatment and surgical approaches - in my case using robotic surgery to remove the prostate gland"

Nick worked for Voluntary Services Overseas in the late 1990s in South East Asia and had a yearly medical check which always found small amounts of blood in his urine. This was followed up in the UK, but his prostate specific antigen (PSA) blood test remained normal when tested by his GP. Although his GP insisted that his prostate was 'within normal boundaries', Nick sought a referral to UCLH after reading about prostate cancer online.

Nick was first seen at UCLH in 2010. Following a CT scan and subsequent biopsy he was diagnosed with cancer in two parts of his prostate. Nick recalls the deep, numb feeling of leaving UCLH and walking head down towards Warren Street station aware of every crack on the pavement and desperate to make sense of both his diagnosis and future.

At Nick’s first appointment he met consultant urologist Professor John Kelly and clinical nurse specialist Jane Coe. His type of cancer was explained in detail and his treatment options discussed. Nick recalls, “I was completely surprised by the lead that the clinical nurse specialist nurse took from the outset and the way in which both consultant and nurse outlined treatment options as equal partners. The team were both articulate and considered in presenting detailed information. They offered me access to new forms of treatment and surgical approaches - in my case using robotic surgery to remove the prostate gland (radical prostatectomy)”.

"A combination of the latest research led treatment options, a supportive team and carefully presented information has kept me alive and well"

Nick felt that a robotic prostatectomy provided him with the best outcome – at that time a relatively new treatment procedure offered by UCLH. He said, “The advice was succinct, sensitive and empowering and allowed me to have a say on my own treatment and future. I quickly began to feel like I was part of the team managing my cancer”. Nick was supported by the team of clinical nurse specialists from the outset. He met them regularly for appointments and they were always at the end of the telephone to support him in managing his anxieties and discussing his proposed treatment.

Nick’s robotic prostatectomy took place successfully. After the procedure he met lead uro-oncology nurse Gillian Basnett who commented, “You don't recognise me do you, but then you were anaesthetized!” Gillian had been present during Nick’s operation and would be instrumental in his recovery over the following months. He met with her regularly along with clinical nurse specialist Anna Mohammed. Nick recalls, “Gillian and Anna were tremendous – they provided me with a kind, considerate and supported recovery that I would wish for anyone else that has to fight this cancer”.

Nick is now six years on from his treatment at UCLH, but he still attends for appointments with his CNS team, “The nurses are well aware I have young children and I have always very clumsily attempted to articulate my sense of thanks every time I see them. A combination of the latest research led treatment options, a supportive team and carefully presented information has kept me alive and well”.