A Tribute to Richard Sainsbury by Sasquatch Bob

Back to Respiratory Medicine 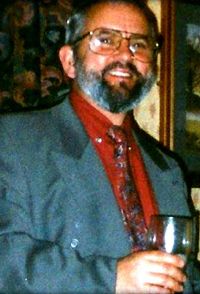 I didn't know my girlfriend's father, Richard Sainsbury, that long really, just a little over three years in fact. I knew him long enough to be deeply impressed and inspired by him though. He was a truly remarkable man, and watching him deal with his coming fate in his final months is something I'll never forget.

The first time I met him, he was in his favourite arm chair, shirt sleeves rolled up to show his old sailor tattoos, hair slicked back in the teddy boy style, watching TV with one of his grandchildren on his knee. In the time I knew him, I hardly ever saw him without one of his family sat on his knee, cuddled up to him or playing at his feet. His family, and granchildren in particular, were by far the most important thing in his life. He adored them, and in return they adored him too. Barely a day passed without one of them visiting Grandad Richard.

I can't remember exactly when I heard or found out that Richard was dying of IPF, but I can clearly remember the devastating impact the news had on everyone around him, including my girlfriend, Mandy.

Richard wasn't Mandy's natural father, but he'd raise her since she was a toddler and as far as he was concerned she was his daughter. In turn she, like the rest of the family, worshipped him. She was shattered by the news and it was a very tough time for her.

The one person who seems unaffected by the news that he had less than a year to live and he'd deteriorate and suffer horribly towards the end was Richard himself. We saw a lot of him during his illness, most days in fact, as Mandy tried to spend as much time with him as she could before it was too late. During that time, I never once saw him look sad or unhappy and I never heard him complain. Not once. He remained the same loving, family man he'd been before he got ill. If anything, he became even more determined to be there for his family.

In his last weeks, the deterioration was fast. Even when he eventually became bed bound, he would still have his youngest grandson, Logan, cuddled up to him whenever I saw him.

Unsurprisingly, Richard's eventual passing was a hammer blow to the whole family. The funeral was one of the most intense, emotional and upsetting things I've ever witnessed. Actually, one of the things that struck me at the time was how much more impact his passing had on those around him than the death of my own father several years earlier. It was a testament to just how important he was in the lives of the people who knew him!

During Richard's illness, his family all reacted differently, and handled it in different ways. One of the things some people did, especially Mandy's younger half-sister and Richard's daughter Dionne, was to throw themselves into fundraising and awareness for Idiopathic Pulmonary Fibrosis. She did so many fundraising events I lost track of them all.

I was moved so profoundly by what I'd seen I desperately wanted to do something to contribute, but had no idea what to do. Dionne had most of the obvious sponsored events covered. So, as music's about the only thing I'm any good at, I decided to do a charity single.

I'm an experienced musician with many years, but I'd never attempted anything like this. It was quite a daunting task, but nothing compared to dealing with IPF, so I got on with it without complaining.

Just as a quick side note, I've thought this way many times since then. Sometimes, when something's been tough, I've stopped myself and thought of how incredibly Richard coped with something infinitely harder, then pulled myself together and got on with it.

How the single came to be is a story all of its own (which can be found at www.sasquatchbob.com by the way), But the attitude and generosity of the people who helped me out was truly amazing and humbling.

The last 12 months or so has been hugely challenging and emotional, but the whole experience, and mainly Richard himself, has really opened my eyes. The way Richard's family pulled together and became closer than any family group I've ever know, the way people gave so much of themselves to help me with my single, the way Richard devoted himself to his family, and finally the way he dealt with what he went through towards the end, all showed me things about what's actually important in life and how amazing, and surprising people can be.

I can feel the tears well up as I type this so I'll end now with this final thought: Richard's passing left a hole in so many people's lives which will, and can never be filled. I'm a better man for knowing him, and I try hard daily to be better because of him. So many things about him are an inspiration to me and how I live my life now. If I can become half the man, and half as loved as Richard Sainsbury I'll think myself a very lucky man indeed. RIP Richard, gone but never, ever forgotten.