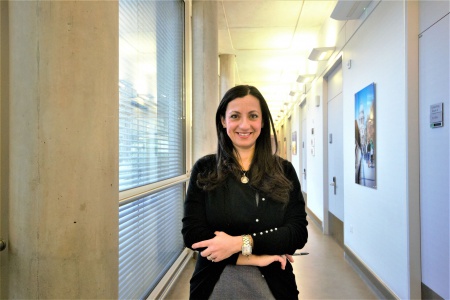 Dr Perla Eleftheriou is a consultant haematologist at UCLH and honorary clinical senior lecturer at UCL. She works within the specialist red cell unit of the UCLH haematology department and her area of expertise is red cell haematological disorders. This includes the treatment of thalassaemia, sickle cell disease, red cell enzyme deficiencies (i.e. G6PD, Pyruvate kinase deficiency), red cell membrane disorders (i.e. spherocytosis, elliptocytosis), polycythaemia and anaemias. She also has strong interest in iron disorders and treats patients with iron deficiency and haemochromatosis (genetic and non-genetic). She treats patients with intravenous iron. She sees patients with abnormal blood counts, such as platelets or white cells out of range, and provides diagnostic expertise in patients with enlarged lymph nodes.

Dr Eleftheriou graduated from the University of Giessen in Germany in 2000 with honours. She was awarded the A.G Levants Foundation Scholarship for young scientists for three consecutive years.

She completed clinical research fellowship at UCLH/UCL for two and a half years (2004-2007), studying the effect and tolerability of iron chelators in adult and paediatric patients with haemoglobinopathies and other rare transfusion dependent anaemias and transfusional iron overload. She has a strong and continuous interest in clinical trials in the field of red cell disorders and acts as co- investigator, principal and chief investigator in international clinical trials run at UCLH.

In 2006, she was awarded with a scholarship for young researchers in Haemoglobinopathies by the European School of Genetics.

She has presented posters and oral presentations at various national and international conferences, and published in her field of interest. She is a member of the National Haemoglobinopathy Panel, is scientific advisor to Thalassaemia International Federation and Coordinator of the Renzo Galanello fellowship hasted at UCLH annually. She teaches haematology at UCL, RFH and University of Westminster.