War in the Blood, a film about treating cancer patients with CAR T cell therapy 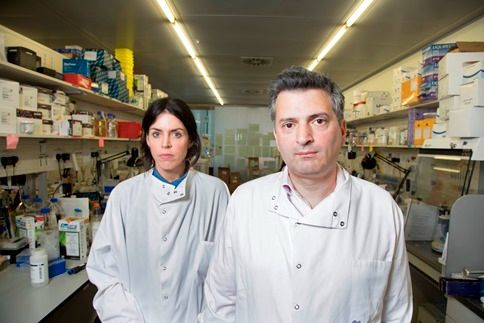 These clinical trials are testing new treatments which ‘re-programme’ the immune system to recognise and kill cancer cells, providing a more efficient and less toxic way of treating cancer.

Between them, UCLH and UCL are leading the largest portfolio of CAR T cell studies in Europe with underpinning support from the National Institute for Health Research (NIHR) University College London Hospitals (UCLH) Biomedical Research Centre (BRC) and funding by several partners including the blood cancer charity Bloodwise, and the EU 7th Framework Programme.

Dr Martin Pule of the UCL Cancer Institute, who leads the UCL CAR T-cell programme and whose work is the main focus of the film, said: “CAR T-cell therapy can result in long lasting remissions in patients with blood cancers which have failed all standard treatments. CAR T-cell therapy is a revolutionary new approach in treating cancer.”

Treatments which use the immune system to fight cancer are different to conventional treatments. Our immune system can be much more selective in discriminating between normal and cancerous cells which means that many of the common side-effects of conventional therapies are avoided. Also, immune responses can last for many years, preventing relapse.

Most of the BRC-supported immunotherapy clinical trials focus on using an immune cell called a T-cell to attack cancer. This cell can be imagined as a miniature robot which moves around our bodies, looking for infected cells and killing them. However, T-cells do not recognise most cancers, since cancers develop from our own tissues and appear normal to most T-cells. The main challenge with T-cell immunotherapy approaches is to find ways to direct T-cells to attack cancer cells.

CAR T-cell therapy directs T-cells to attack cancer cells by harvesting T-cells from blood and genetically engineering them outside the body so they are reprogrammed to kill cancer cells. Once they are infused back to the patient, these CAR T-cells act as miniature robot, and find and destroy cancer cells.

BRC director Professor Bryan Williams said the centre had supported the team from outset. He said: “We supported this work because we could see the potential for it to generate new and potentially life-saving treatments for cancer. It is truly remarkable to see the speed at which this has happened - it is an example of research in action in the NHS at its very best.”

The BBC’s intimate feature length documentary follows two patients through their treatment and the doctors battling to save their lives. Filmed over two years at University College Hospital and UCL, the 100-minute film War in the Blood, directed by Arthur Cary, is a powerful statement on the contribution of terminally ill patients to the world of clinical research.

Not allowed to meet and separated by two floors of a hospital, 53-year-old Graham and 18-year-old Mahmoud are nevertheless bound together by their commitment to the treatment and their faith in the science. Terminally ill, the trial represents their only option. How do their ages and life experiences affect their physical and emotional response?

For the scientists and clinicians working to develop this treatment, the responsibility of designing and testing new treatments in patients is both exciting and daunting. At the heart of this film is the complex relationship between scientists developing these treatments, the clinical team testing them and the patients receiving the experimental therapies.

The documentary is uncompromising and does not shy away from the experiences of patients with end-stage cancer and the complex motivations behind participating in an experimental clinical study.

UCLH consultant haematologist Claire Roddie said: “CAR T-cell therapy is a form of personalised treatment for patients who do not respond to standard anti-cancer treatments like chemotherapy and has been shown in trials to cure some patients with cancer, even those with advanced cancers. Most treatments used in patients with end-stage cancer extend life by a few months. For a good proportion of patients, CAR T-cells are resulting in cures. This is unprecedented.”

CAR T-cell therapy has so far shown most promise for haematological (blood) cancers, and Professor Emma Morris of the UCL Division of Infection & Immunity says the therapy represents “a real step change in how we treat cancers. It represents a leap in medical therapies, from using small chemical molecules or proteins to using cells. The complexity of cells means that they can be engineered in highly ingenious ways, leading to treatments with specificity and activity unimaginable in conventional treatments.”

UCLH is looking forward to opening the Sir Naim Dangoor Centre for Cellular Immunotherapy in 2020. This will be an eight-bed unit at UCLH within a new surgery and cancer building made possible by a generous gift of £1.6 million from the Exilarch’s Foundation, and will build on the world-renowned expertise and ground-breaking advances being made at UCLH to successfully treat cancer using cellular immunotherapy.

At UCLH, Professor Karl Peggs established the clinical translational side of the academic CAR T-cell programme and is now working on setting up Europe’s first dedicated cellular immunotherapy research and treatment centre.

The establishment of this centre will enable UCLH to focus research on advancing cellular immunotherapies. As Prof Peggs says: “While clinical translation of cellular immunotherapy research into blood cancers has already shown positive outcomes, more research is desperately needed. We anticipate that through this research, treatment for other types of cancer – such as skin, ovarian, liver and lung cancers – will be developed, meaning greater cancer survival rates. It is a very exciting development that could be a game changer for the treatment of cancer.”

War in the Blood, produced by Minnow Films for BBC Two, and directed by Arthur Cary, originally aired on Sunday 7 July 2019 and is being broadcast again on BBC Two tonight 20 January 2020 at 9pm.