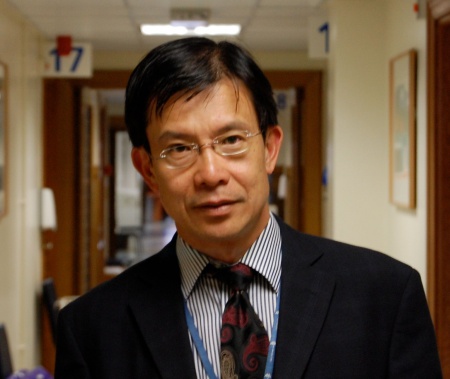 He was awarded the Martin John Turner scholarship prize by his medical school, American Association for Cancer Research (AACR) UpJohn Award in 1993, McElwain Prize by The Association of Cancer Physician (ACP) for outstanding cancer research in 1994 and a PhD degree by University of Manchester in 1994.

Professor Lee is an internationally renowned authority on lung cancer treatment and research. He has designed and led several randomised NCRI lung cancer trials in the United Kingdom over the past two decades which have changed practice and improved treatment outcomes for lung cancer patients. His group established the routine use of gemcitabine/carboplatin chemotherapy to treat lung cancer, quoted in several cancer treatment guidelines.

His innovative trials with thalidomide as a cancer weapon and the smart drug erlotinib to treat poor performance lung cancer patients received widespread publicity including BBC ten O’clock news at launch. His research has also helped identify and validate prognostic and predictive markers for lung cancer outcomes. His ET trial was the first prospective biomarker chemotherapy trial with ERCC1 to select lung cancer patients for doublet chemotherapy and demonstrated that platinum is superior to non-platinum chemotherapy and should remain the standard of care.

His latest trials examine the role of atezolizumab (IPSOS) to treat poor performance non-small cell lung cancer and hydroxychloroquine (Study 15) for small cell lung cancer. His team was also part of the international FLAURA and KEYNOTE-189 Investigators that recently established osimertinib and chemotherapy-pembrolizumab combo as first-line therapy to treat EGFR mutant and wild-type lung cancer respectively. His trials have been recognised at major international conferences with many invited presidential, plenary and oral presentations at World Lung Cancer Conference, ASCO and ESMO and have resulted in several 1st or senior author publications in high impact journals. His lung cancer research contribution was part of the successful application by UCLH/UCL in 2006 to become one of the country’s NIHR BRC centres, and by UCL Cancer Institute to become a Cancer Research UK Centre in 2009 and a Cancer Research UK Lung Cancer Centre of Excellence in 2014. His practice-changing trials and 4* high impact research publications were used for the REF 2014 exercise which ranked UCL top for research in UK.

Professor Lee has also contributed to several practice-changing papers for other types of cancer (as first or last author) including:

Professor Lee currently chairs the London Lung Cancer Group, which has a longstanding international research reputation and is clinical lead of the thoracic medical oncology unit at UCLH. He, with Professors Boshoff & Swanton, oversaw the strategic link with Manchester which resulted in the successful application by UCL Cancer Institute, and Manchester to become the first and only Cancer Research UK Lung Cancer Centre of Excellence in 2014.