UCLH hosted the new chief executive of the NHS yesterday within hours of her appointment being announced. 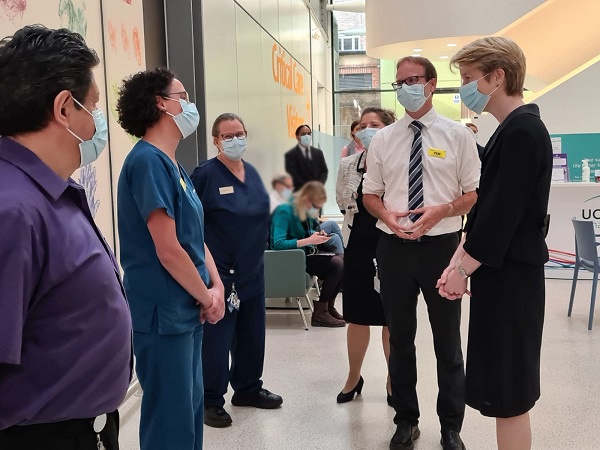 Amanda takes up her appointment on Sunday, replacing Simon Stevens who led the NHS for the past seven years. She is the first female chief executive of the NHS in England.

Tim said: “We were very pleased to welcome Amanda to UCLH and she was very complimentary about our new hospital, the Grafton Way Building. She met several of our staff and took time to listen to their experience of working for the NHS.”

Flo said: “We are delighted to learn of Amanda’s appointment and look forward to working closely with her and her team.”

Amanda described her new appointment as a “great honour”.

And she said she was "thrilled" to be the first female leader of the NHS, an organisation of which more than three quarters of its staff are female.

She added: "I have always been incredibly proud to work in the health service but never more so than over the last 18 months as nurses, doctors, therapists, paramedics, pharmacists, porters, cleaners and other staff have responded so magnificently to the COVID pandemic.”

This was very much in evidence yesterday when she stopped to speak to about 20 staff including support staff, radiographers, nurses and administrators before she left the Grafton Way Building.